As I mentioned earlier, I managed to avoid alpine skiing in Sun Valley for six days. However, I fulfilled a desire I’ve had for a long time – nordic skiing. The idea of being in a winter wonderland without the crowds and mechanical contraptions called lifts is very appealing to me. So on my “day off”, carefully negotiated with the VP of Happiness, I headed from Hailey up to Galena.

Galena is an old mining town that disappeared except for Galena Lodge, now used as a base for nordic skiing, snowshoe hikes, and occasional gourmet dinners. Owned by a foundation, it is run as a non-profit for the benefit of the community. It is blessed with an altitude of over 7000 ft., giving it great snow, and a network of old mining roads, giving it a plethora of places to ski and snowshoe.

For those who haven’t watched the Winter Olympics, nordic skiing has two styles – traditional and skating. Given my experience with rollerblading, skating, and alpine skiing, I chose the skating style for my first attempt.

Like most things in life, I chose not to get a lesson. That ranks right up there in the Manly Men rules, along with not reading a manual or not needing a map. After getting the skis on, I was promptly dumped to the ground by my equipment as it tried to establish dominance over me. Being the Manly Man I am, I got back up and taught those skis who the boss is. They gave me two strides before putting me on my butt again.

I’m glad to report that was the last time I was humiliated by skinny skis. I set out on a green 3K route and quickly discovered that the skating method is not kind to low aerobic capacity flatlanders now at 7000 ft of elevation. I humbly watched a family of four slowly pass me as I tried to get my heart rate down to something reasonable. It was tough but the return loop was downhill and made me forget how hard the climbing was. 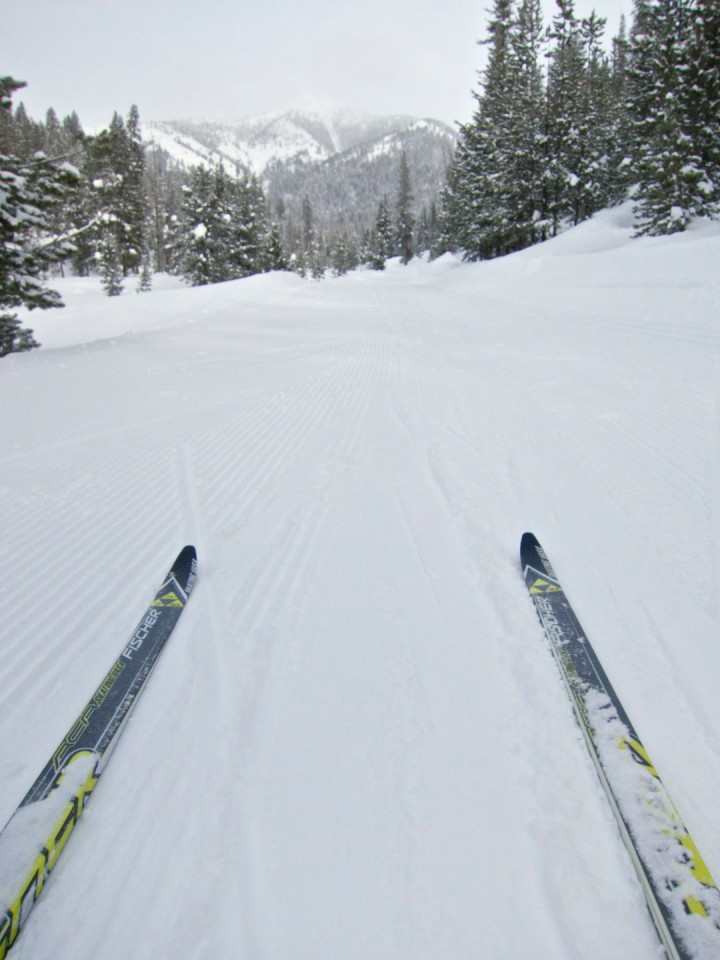 After a nice lunch at the lodge, I asked where I could go that had the least amount of people. The guide sent me on a 4K blue trail that, like the first, did nothing but go uphill until the turn around. However, it did give me solitude. I only saw one other skier during this trek. The sun came out (it was actually snowing when I started), and the scenery turned into winter wonderland. (click on the gallery for bigger pictures) 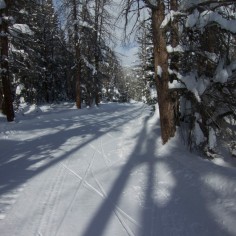 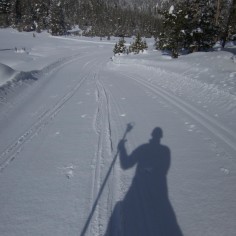 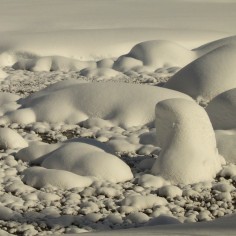 The best part was when I made it to Horse Creek Meadows. At the turn around point, I plopped myself on the ground to recover a bit and was greeted with the sound that I truly miss from the West. Nothing. Silence. No birds, no planes, no cars, no wind. When this happens, your brain doesn’t know what to do so it seems to add white noise. It’s almost magical and if it wasn’t for the fact that I was getting cold, I would have stayed for much longer.

I “hit the wall” on the way back, with my legs and arms suddenly unwilling to propel me up the last hill before the lodge. As I was pondering my fate, some nordic jock using the traditional method goes waltzing by me, breezily chatting up a storm of encouragement as he crested the hill. It was at that moment I concluded that next time I’ll have to try the traditional style. It seems more peaceful and easier to pace yourself, which my older self likes but my younger self doesn’t. Who will win? Stay tuned until the next trip to snow country.