A Big Hole (In Our Memory?)

Today I am going to embrace a love/hate relationship. I decided to check off another bucket list item by making it to the Grand Canyon. That is the love part. The hate part was knowing that I had to share it with thousands of other people. At the same time.

I know there are alternatives. I could have gone to the North entrance or I could have hiked down into the canyon, but my timeline did not allow for such luxuries. So I did what has come naturally on this trip. I woke up before first light and headed out of the campground in less than five minutes, knowing that every second counted in terms of beating the crowd.

The pre-sunrise scenery was awesome, and I was intrigued by the blue horizon below the sunglow, as seen in the picture on the right. Anyone know why this happens? 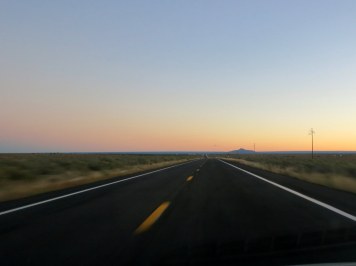 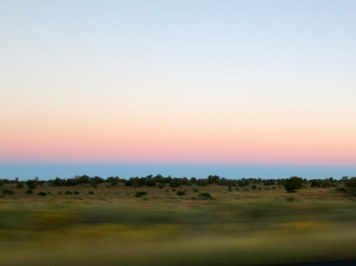 I hit the main entrance at 6:30, disappointed that, unlike Yosemite, they actually have the booths staffed at that time of day. I paid my $25, a bit hard to justify for my brief visit. Maybe that is why my campsite was free last night?

I hit the South Village and stopped at the trailhead for Hermit’s Rest. It wasn’t comforting seeing the bus lane beside me as I hiked and the first views around 7am were hazy due to coming at sunrise, but it was good to get a feel for the place, read the historical and natural information signs, and see some of the famous Bright Angel trail. 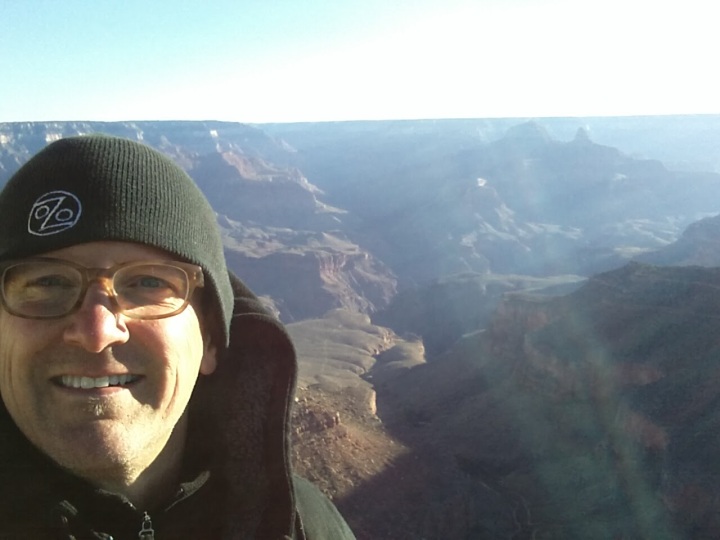 The first bus came through and immediately triggered my flight reaction. I almost ran back to my car and was amazed that in 30 minutes I had gone from being by myself to being a part of a mob. I headed out of South Village on Desert View Dr., hoping to find some less traveled paths away from the hotels and campgrounds.

I succeeded in finding a nice spot where I could rest, relax and finally eat my breakfast. This breakfast definitely hits number one on my top ten breakfasts of my life. 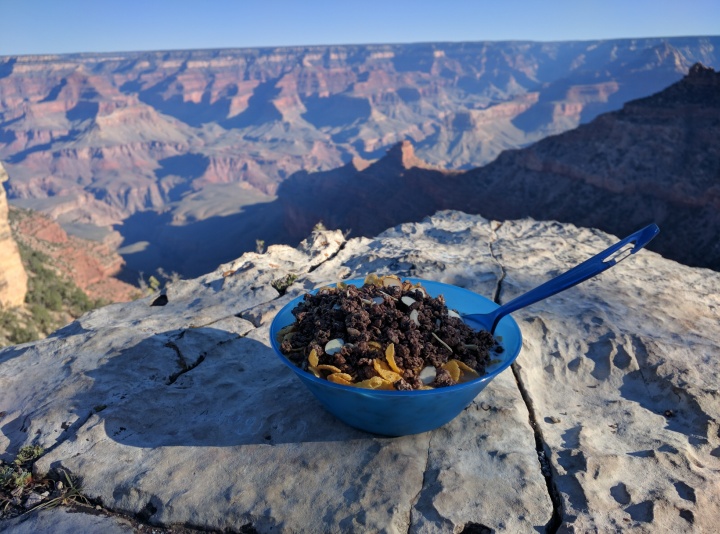 There are three trails that head down into the canyon from the south rim, and after looking at the big hole for an hour, I was anxious to get down into it. I figured I had about an hour to head down and up, so I hit Grandview Point hoping to take the Grandview trail for a bit. Unfortunately, it was time for lady luck to turn on me. After taking a few pictures, I noticed an ominous “Trail Closed” sign. I then read that due to trail maintenance, the trail was closed to day hikers. I spied a group of backpackers heading down, and since this was my only shot, I decided to tag along to see if I could slip by. The short answer is no. My $25 did not even get me on a trail! It was only closed for two days, so my good luck from last night is officially canceled out.

Disappointed, I continued east to the Desert View Watchtower, only to see the 15 tour buses already there at 8:30. I did some quick pictures, toured the campground for possible future trips, and headed out of the park by 9:15. Not even three hours. 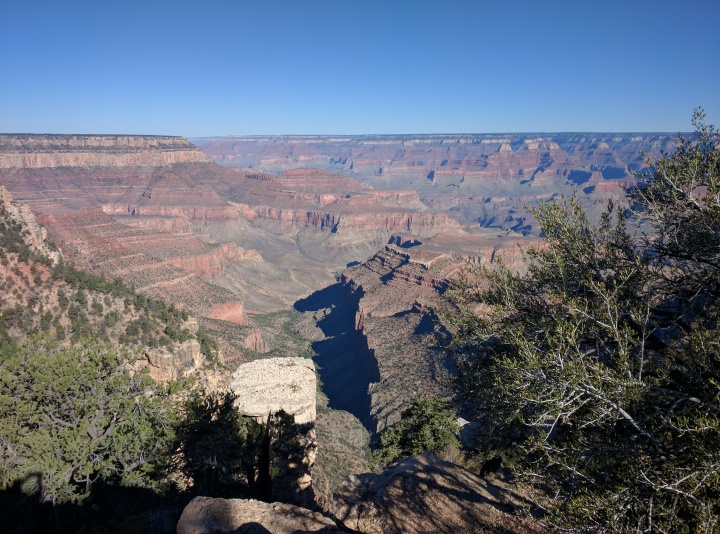 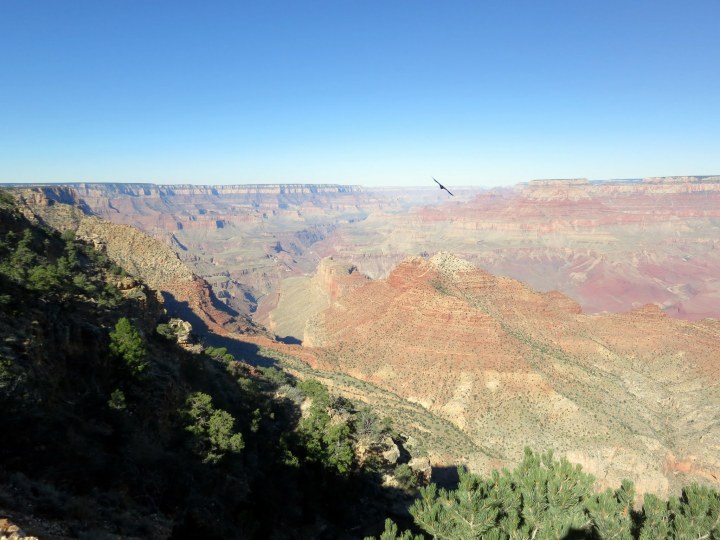 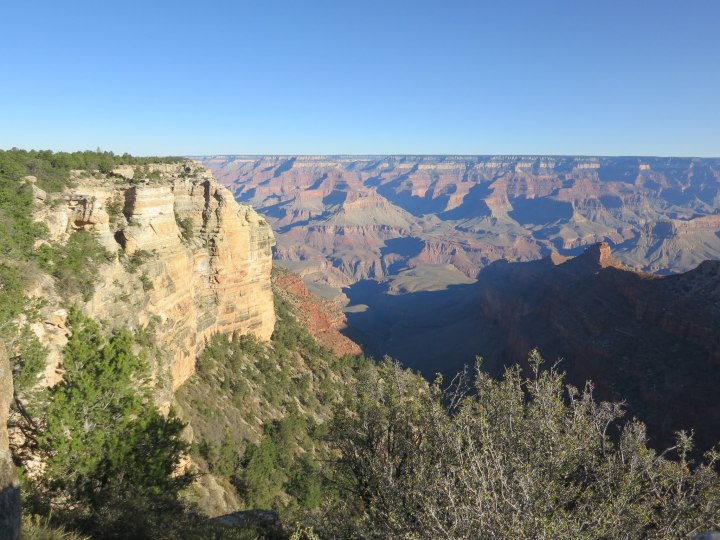 I pointed my way east and saw that I had a choice – superslab through Winslow, or two lane through a Reservation. It was hard choice, as I have always wanted to be “on a corner in Winslow Arizona,” but my explorer side won over my pop culture side and so I hit the two lane.

Highway 264 cuts through both the Navaho Nation and the Hopi Reservation. My thoughts keep bouncing all around as I drive through settlements, trying to respect their autonomy and their culture while coming to grips with how they were treated by the “expansive” white mindset 150 years ago. This seems to be the hole in our collective memory, laid bare only through a physical visit in their now-constrained world. My book club is currently reading two books on the disinherited, and while much of the nation deals with disinherited black people right now, the disinherited native americans have an equally disturbing history of mistreatment, both officially and unofficially, by white entitlement. 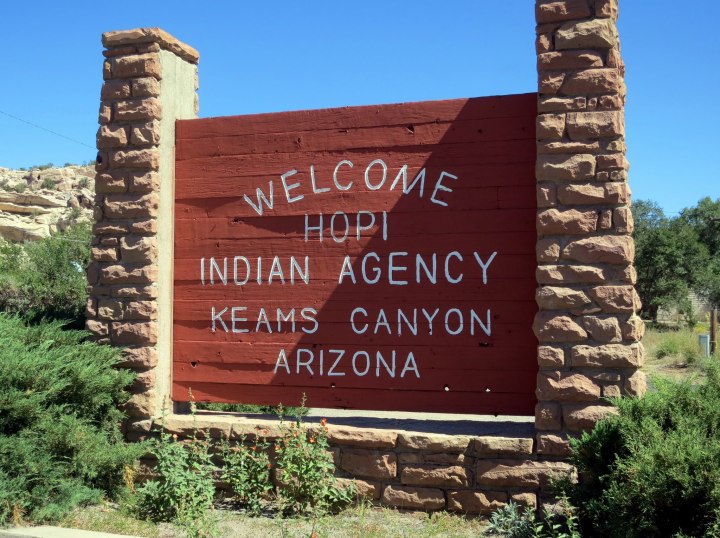 I am going to stop and get off my soapbox before I start, but the hardest part of both disinherited groups is that I do not have the answers. The problems are complex and resist most attempts at healing, and all I can do is continue to seek answers to how I personally deal with the historic and the present injustices.

One historical answer, presumably, is the example John Hubbell set. He started a trading post for the Navaho indians shortly after they returned from the Long Walk, impoverished and homeless. I visited the National Historic Site and learned that multiple generations of his family served the needs of the Navaho, honestly dealing with them so they could restore and grow their lands and wealth. However, I have to admit I am curious if the Navaho would write the same stories as the National Park Service has. History is still written by the victors.

I exit the reservation and hit the superslab, shocked again by the contrast, but thankful for yet another truckstop shower. Just in case you were wondering, I rate Love’s showers as much better than Petro’s, regardless of the latter’s marketing claim of “hospital-grade” showers.

Refreshed, I rush off to my last campground of the trip, blasting along I40 and through Albuquerque to arrive before sunset. I end up on a 12 mile dirt road for the last bit, but I arrive at a deserted campground, with nothing but trees and starts to keep me company through the last cold night.

Links to the rest of the journey:

Leaving Nashvegas
Why I Don’t Camp in the East
Aunt Panda and Homebrew
Bucket List Maintenance
Gee, That’s Swell
AdversityHumanity and Home?
Hot and Cold
What I Learned From The OC, Part One
The OC, Part 2 – We Are Family
Brother Spike
A Big Hole (In Our Memory?)
Leaving the Mountains Behind