The Spirit of the Law

We’re building a garage. For most of you, this is a simple procedure. Draw up plans, get your building permits, build.

However, we’re old house fans. We love the character, the sense of history, and the sense of place that comes with a building that is 100 years old. In most historic neighborhoods, there are now guidelines and rules that are designed to keep the look and feel of the neighborhood as everyone tries to modify their property for modern needs and density. In our neighborhood, Richland West End, there is a Historic Overlay that puts many limits on the size and design of house additions, and I’m generally okay with these.

Like most well-intended restrictions, there was an unintended consequence. People started building huge outbuildings instead of adding on to their houses, and a few vocal people here in Nashville wanted to stop them. The Nashville Metro government catered to these voices and decided to put out guidelines for outbuildings and DADUs. These guidelines are designed to ensure that the outbuildings are subordinate to the main structure and consistent with existing neighborhood norms. Specifically, here is the language they use:

“A new garage or storage building should reflect the character of the period of the house to which the outbuilding will be related. The outbuilding should be compatible, by not contrasting greatly, with surrounding historic outbuildings in terms of height, scale, roof shape, materials, texture, and details.”

So did our garage plans meet those guidelines? Here’s what the city planner said. 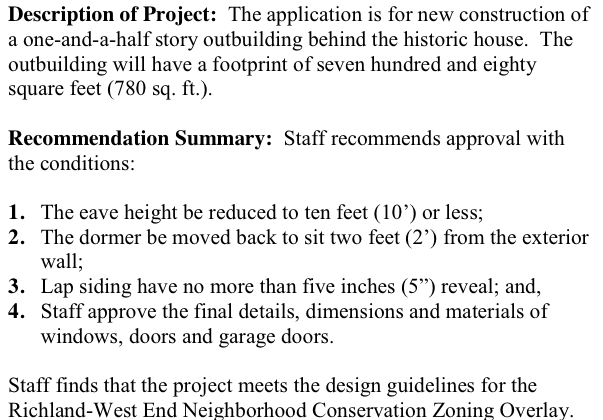 I have no problem with these notes except for the first one. We want to maximize the space above the garage and lowering the eaves (by increasing the pitch of the roof) would reduce our usable square footage by 25% and make the bathroom placement difficult. So what to do? We could keep the upstairs space the same by increasing the footprint of the garage, making it less appropriate for the yard but within the 1000 square foot “regulation” as stated in the guidelines.

But we think the smaller size is more appropriate for the property and believe that with all the other things we’ve done in the design fulfill the spirit of the law. For example, here’s what we presented to show how faithful we were to the house architecture. 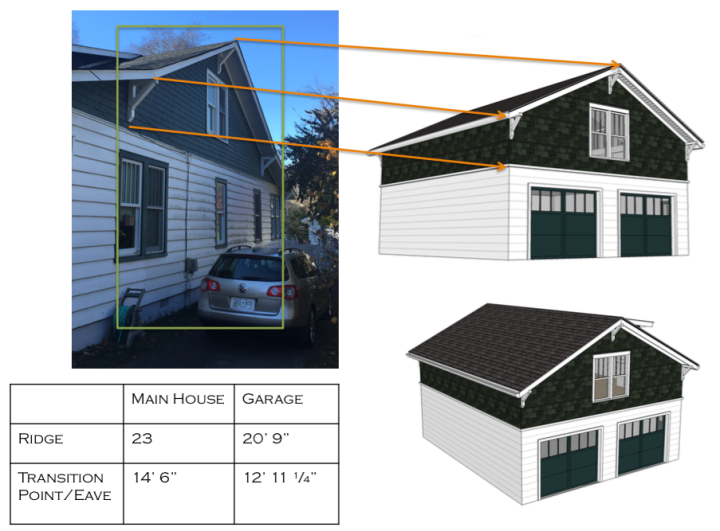 Wednesday was our appointment in front of the planning commission, and our strategy was to make an emotional pitch for the spirit of the law instead of the letter of the law. Coming from California, I didn’t have much faith in these procedings.

It was an entertaining meeting, to say the least. We ended up being the first case to ask for an exemption to the new guidelines, so they had to deal with fundamental questions such as subjective vs. objective determination of “subordination to the main house.” Some members were obviously uncomfortable with the idea that subordination might need to be considered on a case by case basis and were afraid of setting a precedent for exceptions. I was not feeling good at this point. However, others felt that the rules should not act as a penalty for plans that achieve the objectives without following every guideline. I’m starting to feel better….

In the end, against all preconceived prejudices against government, they actually bought our argument and upheld the spirit of the law and not the letter of the law. Approved! My faith in public oversight has grown significantly.

Now about that speeding ticket, Judge. Is speed really a good indicator of safety?