Yes, I tell people in California, it does snow in Nashville. Not much and not often, but enough to make it a snow day. School gets cancelled, Daddy gets to go in late, and we burn more calories before 9:00am than the whole previous day.

It started with a silent dawn and I enjoyed just walking around while listening to that crunch of new fallen snow. It also made a great photo op for our new home in its Christmas regalia. 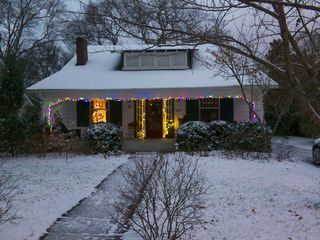 I enjoyed a quite breakfast before waking up Evie and having her look out the window. She ran downstairs and got dressed as quickly as possible to join me out in the snow. The first order of business is always a snowball fight. 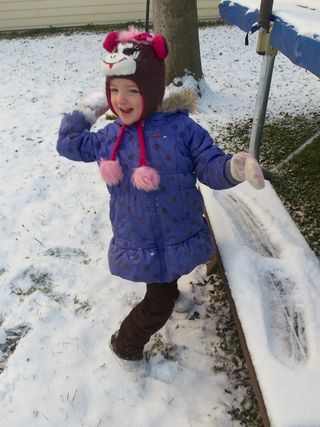 She quickly tired of being pummeled by her show-no-mercy Dad, so it was up to the trampoline to do some "slip n slidin.'"

Then we started jumping on the trampoline in the snow! We noticed that the snow was starting to collect in the middle of the mat, so I promptly got the broom and helped it grow. Then we gathered in the middle and enjoyed playing in our 6" of snow! It was a dry snow, so no snowmen this time.

Though most of the snow melted by the afternoon, it was cold enough for pockets of snow to last for four days. We're looking forward to the next time we're graced with a bit of the white stuff!