Now it is time for the dreaded return. The trip out was expansive, fueling my desire to get up every morning knowing that I was heading out to something special. The return trip feels different, perhaps contractive is a word that fits. Going west to east, even the time is a co-conspirator, with every crossing of a time zone subtracting an hour of my day instead of adding one.

The first half of the day is just getting out of urban LA. Roads, strip malls, and too much traffic makes leaving the ocean even harder. It is not until around Barstow that the scenery changes and the driving becomes easier. I actually laugh when I take the exit from I15 to I40, because this is where I40 starts. How do I know this? They have a sign telling you that it is only 2,475 miles to Wilmington, NC where I40 ends. This reminds me of a friend who is in our home group and recently bought a house there. That memory, a splinter of east coast in a desert landscape, actually helps calm my anxiety about heading east. Instead of thinking about what I am leaving, I start thinking about what I am going home to.

My next stop is a blast from my past. Growing up, I was a huge fan of the Peanuts comic strip. And anyone else who is a fan knows that Snoopy has a brother. He actually has others, but the famous one, the one who garners most of the “strip time,” is Spike. He is the desert-dwelling brother who Snoopy worries about, wondering if Spike is lonely in the desert.

So where does Spike live? Needles, California. Leave it to pop culture to give me a reason to get off the interstate and wander around a dust-bitten small town on the Colorado river. Needles will not win a beauty contest, but I found enough inspiration of Spike sprinkled around to make it a worthy stop. 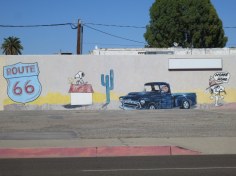 My last thought as I headed back to the superslab was, “Where are the saguaro cacti?” In almost every comic strip with Spike, there was a saguaro cactus in the background. In fact, he actually lived in one. But to my great disappointment, there are no saguaro cacti in Needles.

The rest of the drive was a mad rush to Williams, AZ. Famously, it is the “Gateway to the Grand Canyon.” Less famously, it was the last town on Route 66 to be bypassed by I40. I enjoyed stocking up on grub and wifi at the local Safeway grocery store, then headed north to a campground nearby. To my delight, I found an empty site on a Saturday night. Even better, the camp host told me to keep my money as I arrived at sunset and was planning on leaving before sunrise. I was starting to feel lucky! Let us see what tomorrow has in store.

Links to the rest of the journey:

Leaving Nashvegas
Why I Don’t Camp in the East
Aunt Panda and Homebrew
Bucket List Maintenance
Gee, That’s Swell
AdversityHumanity and Home?
Hot and Cold
What I Learned From The OC, Part One
The OC, Part 2 – We Are Family
Brother Spike
A Big Hole (In Our Memory?)
Leaving the Mountains Behind