I can’t say I have much to complain about. But I will. Day three was a full day, starting with an 8:00am meeting, then too many hours at work blending into a work social outing (agency open house) at 5:30. Yes, for those worrying, I did go home to feed the dog in between work and the social outing. After the open house, I headed to the venerable Ryman Auditorium where I had tickets for the Bluegrass Summer Series, complements of a very kind and generous friend. These were not just ordinary tickets. They were freakin’ front row. Technically second row, but I’m going to claim front row as that is the closest I’ve ever been to the stage at any show. 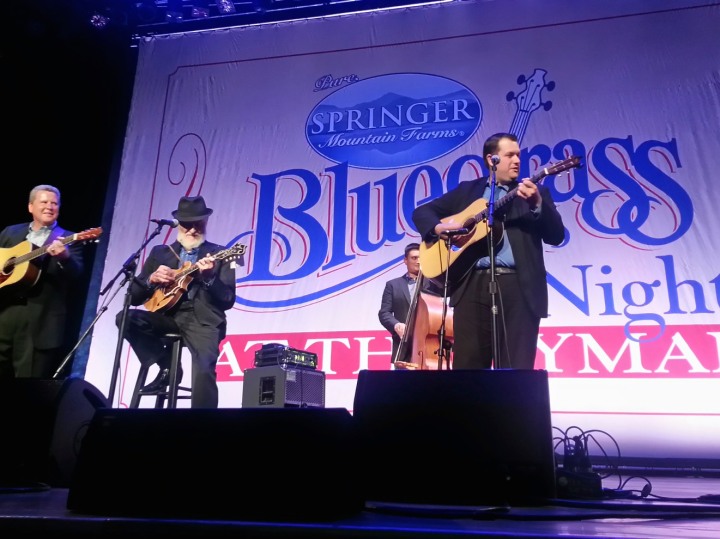 As they say in the South (well, maybe), I was in spitting distance of the band. It was an enjoyable night of music but troubled by my pet peeve of concerts. Why so dark and why so late at night? I found myself leaving a bit early; one because I had much to do before going to bed, and two because I hit my limit.

While I walked back to my car (on a beautiful night, I might add), I came to the conclusion that concerts are wasted on me. The only time I truly appreciate music and the musician is if it is an intimate atmosphere, like the Bluebird Cafe. Larger auditoriums make it too impersonal, and even though this time I was sitting close to the band, I still felt disconnected and, quite frankly, bored. I’d rather sit down with a musician and have them tell me stories straight up than hear it put to music. I’m also more open to having conversations with people about the music, the genre, or the musicians. Blame my linear thinking brain.

So I made the major decision that I would no longer seek out concerts as entertainment. I’ll go to support others and I’ll continue to buy music, but I won’t be investing my time in large-venue concerts. A sign of age or am I finally figuring myself out?